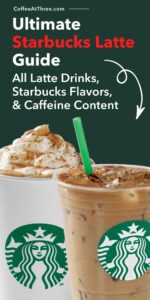 A complete guide to the lattes at Starbucks from hot and iced latte to tea lattes. See what’s in each latte and the different Starbuck flavors that make up the drinks.

Caffé Latte
A Caffé Latte is made with espresso and 2% steamed milk that has a light layer of foam — and nothing else. Starbucks uses its signature espresso roast unless otherwise indicated. This beverage is the second most popular drink ordered at Starbucks.
Caffeine in grande Caffé Latte: 150 mg

Iced Caffé Latte
An iced latte is a perfect way to cool down. Since the milk isn’t steamed, the iced version of the classic Starbucks latte is slightly more espresso-forward and packs a big punch for folks who need a boost.
Caffeine in grande Iced Caffe Latte: 150 mg

Vanilla Latte
Caffé Latte with pumps of vanilla syrup (there’s also a sugar-free version), vanilla latte is one of Starbucks most popular drinks, even if you don’t see it on the menu.
Caffeine in grande Vanilla Latte: 150 mg

Pistachio Latte
Sweet pistachio sauce is added to a latte and salted brown butter cookie flavored topping is added to the frothed milk to create this new latte that debuted earlier this year.
Caffeine in grande Pistachio Latte: 150 mg

Eggnog Latte [Seasonal]
A holiday favorite, this latte is made with a combination of eggnog, espresso, milk and a sprinkling of nutmeg. This drink is made with nonfat milk instead of 2% milk.
Caffeine in grande Eggnog Latte: 150 mg

Iced Eggnog Latte [Seasonal]
This iced latte returns every holiday and is made with a combination of eggnog (which is only available seasonally), espresso, nonfat milk, and a sprinkling of nutmeg.
Caffeine in grande Iced Eggnog Latte: 150 mg

Caramel Macchiato
Caramel macchiato isn’t listed under lattes but it essentially is one. It’s made with vanilla syrup and caramel drizzle. What makes this drink not a latte is how it’s built, with vanilla syrup and milk in the cup first, then the espresso. The caramel is only in the drizzle. No need to stir, this drink is to be sipped without stirring.
Caffeine in grande Caramel Macchiato: 150 mg

Chai Latte
Chai is a black tea that is mixed with spices like ginger, clove, cardamom, star anise, and others to create a warming and comforting drink. Tazo’s chai concentrate is added to the pitcher and steamed together with the milk. The chai concentrate is sweetened so extra syrup isn’t added to the drink. Add a shot of espresso (extra cost) to make it a dirty chai latte.
Caffeine in grande Chai Latte: 95 mg

The flavored syrups are the key to flavoring Starbucks’ lattes. You can request any available syrup to be added to your latte.

Are Starbucks lattes made with sugar?

Yes, many of them are, but not all of them. Most drinks can be made without sugar if requested, and Starbucks has two sugar-free sweeteners: sugar-free vanilla and sugar-free cinnamon dolce.

Which is stronger: a latte or a macchiato?

Both drinks have the same amount of espresso but a latte has more milk. A macchiato might taste stronger because it has less milk and the flavor of the espresso is more prominent, but the two drinks are the same strength.

What is the most popular latte at Starbucks?

The Caffé Latte, without any flavored syrups added, is the most popular latte at Starbucks. The Vanilla Latte is also a Starbucks customer favorite.

Want to save this Starbucks Latte Guide to Pinterest for later? Pin it now to your Pinterest board!