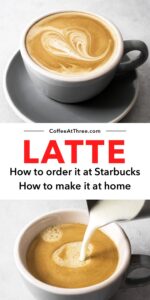 A latte is a caffeinated drink made with espresso and steamed milk. See how to make this popular drink at home and how to order it at Starbucks.

What is a Latte?

Lattes are one of the standard drinks at every coffee shop like americanos, cortados, cafe au laits, cappuccinos, macchiatos, and flat whites.

Difference Between Latte and Cappuccino

Espresso
Both lattes and cappuccinos are be made with 1-2 shots of espresso. It’s not uncommon to order either of these drinks with “an extra shot.”

Milk
A standard latte is made with 8-10 ounces of lightly textured milk, although it can be made bigger by adding more milk. A cappuccino is made with 5 ounces of milk, and this amount doesn’t often vary. (Unless the cappuccino was ordered at Starbucks which offers it in multiple sizes.)

Drink size
Lattes are usually served in 12 ounce cups, but can be bigger. Cappuccinos are almost always 6 ounces, and the size doesn’t often change.

Difference Between Latte and Flat White

Drink size
Lattes can range in size, while flat whites are 6 ounces. Flat whites bigger than 6 ounces are basically lattes.

Lattes are one of the most popular drinks at Starbucks and you can customize it with syrups, like vanilla, and different kinds of milk like soy or skinny (made with skim milk).

Breville’s compact but mighty machine with grinder that I personally use and recommend. Makes great lattes at home!
SEE PRICE ON AMAZON

How to make a Latte at Home

BARISTA’S TIP: If you want to try latte art at home, use this trick: start by pouring your milk from far away, then get closer to your mug as you fill the cup. When you’re pouring far away, gravity helps pierce the espresso. When you get closer, the foam floats on top of the espresso.

Lattes do have more milk than other coffee drinks, so if you want to watch your calorie or dairy intake, you might want to try a drink with less milk like cortados and flat whites.

Standard lattes have no sugar, but latte variations at places like Starbucks are often made with syrups. Vanilla and caramel are common additions, although you might be able to find sugar-free versions of each.

What is a dirty chai latte?

The word ‘latte’ is often used to describe drinks with milk, even if they don’t have espresso. A chai latte is made of milk and chai concentrate or chai tea. A dirty chai latte has a shot of espresso added.

Can you make a latte using a Nespresso or Keurig?

To make a latte using a Nespresso or Keurig, you’ll need a way to steam milk. Make espresso using a capsule or pod then steam milk using a milk frother or steam wand.

Is a latte the same thing as a cafe au lait? 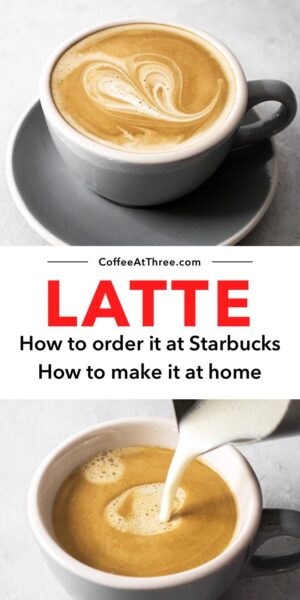 PIN THIS
Want to save this latte guide for later? Save it to your Pinterest board now!
SAVE TO PINTEREST 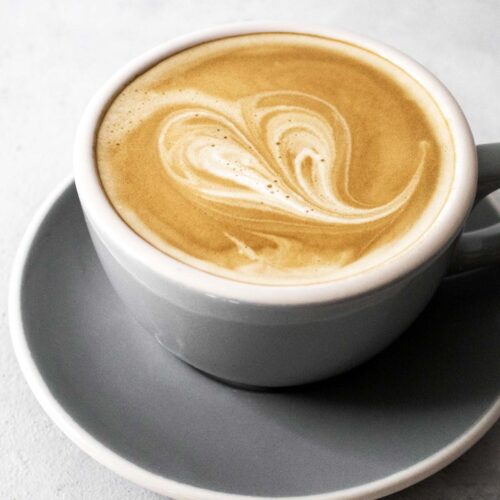 How to Make a Latte

1 thought on “Latte: Overview, Steps to Make It, and How to Order It at Starbucks”