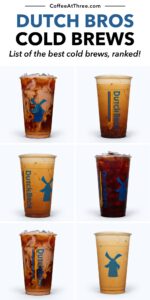 If you’re not sure which cold brew or nitro cold brew to get at Dutch Bros, try one from this list of their 16 most popular.

Cold brew is coffee that has been steeped in cold water for several hours, giving it a smooth and sweet taste. Cold brew at Dutch Bros isn’t made daily at their stores like Starbucks, instead they’re served from pre-packaged cans.

Nitro infused cold brew is cold brewed coffee that has been infused with nitro. The addition of nitrogen creates tiny, uniform bubbles in the coffee, like beer from tap, making the drink smooth and creamy. Nitro cold brew is also sent to Dutch Bros in cans and aren’t made on site, like Starbucks.

Dutch Bros cold brew and nitro cold brew can be ordered hot (“Toasted”) or iced, but most cold brews and nitros are ordered iced.

Cold brews and nitro cold brews at Dutch Bros are made from a blend of their private-reserve coffee beans from Brazil, Colombia, and El Salvador which are roasted in Oregon.

Both cold brew and nitro cold brew have more caffeine than a drink made with espresso. A medium size Dutch Bros breve has 191 mg of caffeine, while the same size cold brew has 240 mg and a nitro has 293 mg.

Get it iced, Toasted, or Blended
Blended Dutch Bros is a coffee drink mixed in their blender to give it a consistency like a Starbucks Frappuccino. Toasted is a hot version of their cold brew or nitro.

Customize your drinks
There are a lot of flavor combinations of cold brews and nitros from the standard menu and secret menu, and Dutch Bros welcomes customers to customize syrup and sauces to create their own flavor combinations.

Make it sugar free
Except for the Blended, which uses a Freeze base to get that Frappuccino consistency and already has sugar in it, iced and Toasted cold brews and nitros can be made sugar free. Some popular sugar-free syrups are caramel, white chocolate, vanilla, Irish cream, and coconut.

All cold brews can be ordered as regular cold brew or nitro cold brew.

15. White Zombie Cold Brew
Iced cold brew with vanilla and white chocolate. Customize it with a splash of chocolate milk and Soft Top. Can be made sugar-free.

11. Hazelnut Cold Brew
A simple cold brew with hazelnut syrup. Add a splash of cream and caramel drizzle to make it taste even better.

10. Caramelizer Cold Brew (Regular & Nitro)
This cold brew plus caramel syrup and chocolate milk is just as popular iced as it is Toasted (hot).

9. Golden Eagle Cold Brew
A Dutch Classic Cold Brew with vanilla syrup, caramel syrup, half & half is topped with caramel drizzle. Ask for it Blended with Soft Top to make it more like a dessert.

4. Annihilator Cold Brew
Chocolate macadamia nut syrup, cold brew, and half & half are in this drink. Try it Blended.

3. Kicker Cold Brew
One of the top ranked breves is also a popular Dutch Classic Cold Brew flavor. It’s Irish cream syrup with cold brew and half & half.

2. Classic Cold Brew (Regular & Nitro)
A classic (“regular” or “black”) cold brew, and with just a “splash of cream,” is very, very popular. Swap out the half & half for any alternative milk.

1. Vanilla Cold Brew
The most popular cold brews are the simplest, and this one made with a can of cold brew and vanilla syrup is at the top of the list. Add a splash of cream and/or Soft Top to make it more special.

Want to save this list of the Best Dutch Bros cold brews for later? Pin it now!