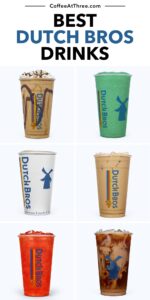 See the most popular drinks at Dutch Bros (including secret menu). From Rebels to cold brews, this list will help you figure out what to try next!

Looking to try a new Dutch Bros drink but don’t know what to get? To help you decide, here is a list of their most popular and best drinks, including ones from the regular menu and secret menu.

How to Order Dutch Bros Drinks

Always order drinks in this order:

2. Hot, Iced, Blended, or Toasted
Most drinks can be prepared hot, iced, blended, and some cold brew drinks are toasted (hot).

3. Name of the drink
The name of the drink lets the broista (Dutch Bros barista) know which syrups and flavorings your drink needs. You can order secret menu drinks by name!

Coffee Options
Dutch Bros has quite a few coffee options and any of these can be used in place of their regular Private Reserve espresso blend.

Soft top
This is a topping you can add to any cold drink. It’s lightly whipped buttermilk that’s like cold foam at Starbucks.

As Sugar Free As Possible
There are the popular, year-round sugar-free syrup flavors (like vanilla, caramel, and chocolate) and sometimes seasonal ones too. When ordering a drink, if you want the broista to use as many sugar-free options as possible, which could include all the syrups in the drink, just say “make it as sugar free as possible.”

Not So Hot Temperature
Hot drinks can be steamed to a lower temperature (100ºF) by asking for the drink to be “not so hot” or kids’ temperature.

Medium is the standard size for all beverages.

23. Snickerdoodle
Chocolate macadamia nut, white chocolate, and cinnamon topped with cinnamon sprinkles, this drink tastes almost like a snickerdoodle cookie. It’s commonly ordered as a Freeze instead of a hot or iced breve, and is popularly topped with soft top or whipped cream.

22. Palm Beach
Pomegranate and peach syrups are combined, usually in an Iced Lemonade or blended. Try it with green or black tea for a caffeine boost on a hot day.

21. White Chocolate Chai
The most popular flavor to add to a Dutch Bros Chai is white chocolate syrup. Usually made with 2% dairy milk and chai mix, this can be customized with the Party Works, which is whipped cream and cinnameg (cinnamon + nutmeg) sprinkles. Similar to a Christmas Morning, which is this same Chai but made creamier with half & half instead of 2% milk.

20. Aftershock
A very popular secret menu drink combining strawberry, blackberry, red raspberry, and lime, particularly in the summer months. It’s usually ordered as an iced or blended Rebel for those looking for a caffeine kick, or as a caffeine-free Lemonade.

18. Peach Blended Rebel
An alternative to coffee for caffeine, this popular Dutch Bros Rebel just uses peach syrup. Ask for it blended to make it a little more special. It can be easily customized with other syrups or soft top, but it’s also tasty on its own.

14. Hazelnut Truffle Mocha
Originally a seasonal drink, this was so popular it’s on the regular menu. Like any Dutch Bros Mocha, it starts off with steamed chocolate milk, hazelnut syrup is added and topped with soft top and caramel drizzle. Ask for it with salted caramel to hide the coffee flavor if you like it sweeter.

13. Dragon Slayer
Combines red raspberry and blue raspberry with a blackberry drizzle. This is usually ordered as a green or black tea or iced Rebel. Another option is to ask for it as a Frost with whipped cream.

12. Double Torture
This is a Dutch Classic, flavored with vanilla syrup and commonly made as a mocha, which uses Dutch Bros chocolate milk. Just like the famous 9-1-1, a Double Torture is an extra shot drink used for a jolt of caffeine. A medium has 4 shots of espresso instead of the usual 2 shots.

11. Strawberry and Pineapple
Completely delicious with Lemonade, it combines strawberry and pineapple syrups. Perfectly balanced between the sweet, fruity syrups and tart lemonade. It’s usually ordered iced or blended, and popular during the summer months.

10. Electric Berry
Flavored with blue raspberry and lime, a lot of people order it as an iced or blended Rebel or Lemonade. Customize it as a Dutch Soda with cream added in to make it extra special.

9. White Zombie
From the secret menu and usually ordered as a Freeze, it combines vanilla and white chocolate. A favorite customization is with soft top and Picture Perfect (whipped cream with chocolate and caramel drizzle on top).

8. Cocomo
The second most popular mocha, Cocomo is made with coconut syrup and chocolate milk. Not too sweet with a smooth coconut flavor, it can be ordered hot or iced.

7. Caramelizer
The most popular mocha on the Dutch Bros menu, this creamy and delicious drink is made with chocolate milk and caramel syrup. Modify it with sugar-free caramel or any of the alternative milks. A popular customization for those who like a stronger coffee flavor (to keep the flavors but offset the sweetness) is to ask for a triple shot. Order it Picture Perfect (whipped cream, chocolate and caramel drizzle) to make it even tastier.

5. 9-1-1
An Irish cream breve with quite a kick. It’s famous for its extra shots of espresso with 6 shots in any drink size. Some get it with white coffee, which is intense, since it has more caffeine per shot than the regular espresso. A 9-1-1 with white coffee, any size, has about 407 mg of caffeine.

2. Picture Perfect Freeze
Also known as a way to style any coffee drink, it’s popular to order it as a Freeze. It’s one of the more simple drinks at Dutch Bros but a great option without too much sweetness.

1. Golden Eagle
Caramel is a very popular flavor at any coffee place, and this number one Dutch Bros drink is no exception. Golden Eagle is a caramel macchiato and it’s a sweet breve with caramel and vanilla syrups and topped with caramel drizzle. It’s popular hot or iced. Try it as a Golden Eagle Chai.

Want to save this list of the Best Dutch Bros drinks for later? Pin it now!