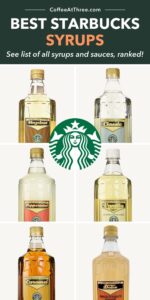 If you want to recreate Starbucks drinks at home, you can buy their syrups directly at a store by asking at the register.

I’ve seen Starbucks syrups on Amazon and Ebay priced at $30+ but it costs half that at a Starbucks location.

They can only sell the syrups if they have enough in stock and not all syrups are available for purchase.

A syrup must have a barcode for it to be sold to a customer. Vanilla syrup, sugar free vanilla syrup, classic syrup, and caramel syrup are the only syrups with barcodes.

You’ll have the most luck with vanilla syrup since it’s the most popular and stores usually have extras in stock.

15. Toffee Nut Syrup
The only menu item that’s made with this syrup is the Salted Caramel Mocha, a seasonal drink. It’s not a popular syrup during most of the year but it’s very popular in the colder months.

14. Brown Sugar Syrup
This was used to make the Iced Brown Sugar Oatmilk Shaken Espresso and thanks to TikTok, it’s often added to Hot and Iced Chai Lattes as it’s said to make it taste like cookie butter.

13. Dark Caramel Sauce
This syrup is seasonal and is rarely ordered on its own. It’s used in the Caramel Ribbon Crunch Frappuccino.

12. Peppermint Syrup
Most ordered with Mocha Syrup to make a peppermint mocha drink, it’s sometimes ordered on its own in iced coffees. There are several secret menu Frappuccinos that use peppermint syrup, most of which are popular around the holidays, like the Candy Cane Frappuccino.

11. Honey Blend
The Honey blend beverages are very popular among vegans (even though the syrup itself is not technically vegan, a lot of vegans make an exception for honey.)

10. Cinnamon Dolce Syrup
This started out as a seasonal syrup but due to its popularity, it was made available all year.

5. Caramel Sauce
Used to make Caramel Macchiatos and Caramel Frappuccinos, which are both incredibly popular.

4. Mocha Sauce
Mocha Sauce is prepped daily, at each Starbucks location, using a mocha powder. This is the only sauce that doesn’t contain dairy.

2. Cane Sugar
This is most often used in iced teas, it’s a sweetener and doesn’t have any additional flavoring.

1. Vanilla Syrup
The most popular syrup by far! With Vanilla Lattes being super popular, this syrup goes fast.

How do I customize a drink with syrup?

On the Starbucks app, syrups can be added under “Flavors” and at the store, you can order a drink with however many pumps of the syrup you like.

To top a drink with a thin layer of sauce of syrup, you can ask for a drizzle. At Starbucks, there’s Caramel Drizzle, Mocha Drizzle, and Strawberry Drizzle.

Can I add more than one syrup into a drink?

Yes! You can mix, match, and add as much syrup into a drink but be aware there may be an extra cost.

Want to save this list of the best Starbucks Refreshers for later? Pin it now to your Pinterest board!