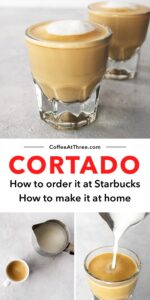 Cortados are a happy balance of espresso and milk. Here’s everything you need to know to order and make this drink at home.

What is a Cortado?

Difference Between Cortado and Latte

Milk
Cortados have lightly textured milk, about 2 ounces. Lattes can have anywhere from 8 ounces of milk or more. Both cortados and lattes have a thin layer of microfoam on top.

Drink size
Cortados are served in 4 ounce cups—sometimes in clear rocks glasses called a gibraltar. Lattes are served in cups that are 8 ounces or bigger.

Difference Between Cortado and Cappuccino

Espresso
Cortados have 2 shots of espresso, while cappuccinos have 1-2 shots.

Difference Between Cortado and Macchiato

Espresso
Both cortados and macchiatos have 2 shots of espresso.

You would think Starbucks would have cortado on their menu, but nope. It’s not an official Starbucks espresso drink so be prepared to explain how the drink is to be made in case the barista doesn’t know.

To order it, ask for a double shot of espresso with 2 ounces of steamed milk on top.

Since it’s not an official Starbucks drink, it may be rung up as an espresso macchiato or another drink.

The machine I use to make espresso-based drinks every morning. I love it and recommend it.
SHOP NOW

How to Make a Cortado at Home

BARISTA’S TIP: It’s not easy to steam just 2 ounces of milk, which is why you should froth 4 ounces at the minimum to prevent burning the milk.

Is a cortado a flat white?

Is a cortado sweet?

Traditionally no. There’s no sugar in a standard cortado, but in some countries drinks similar to cortados (like a Cuban cortadito) might have sugar. You can add sugar at the end if you’d like.

Why is a cortado served in a glass?

Are cortados stronger than macchiatos?

No. Both have two shots of espresso, so they’re the same strength. A cortado has an ounce more of milk, so it’s more harmonious with the milk versus a macchiato, which is espresso-dominant.

How do you pronounce cortado?

How can I make a cortado with a Nespresso or Keurig?

Make 2 shots (2 ounces) of espresso in a Nespresso or Keurig then add 2 ounces of steamed milk.

PIN THIS!
Want to save this cortado guide for later? Pin it now to your Pinterest board!
SAVE TO PINTEREST 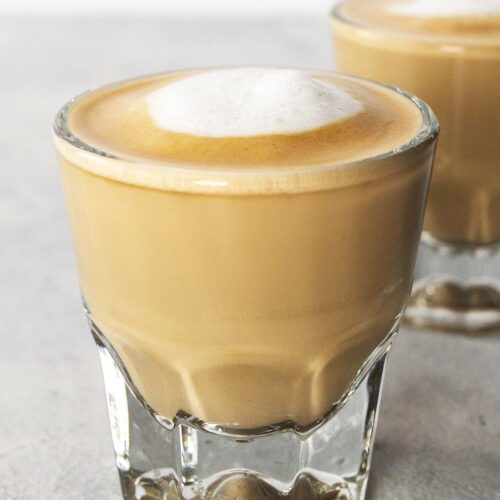 How to Make a Cortado

3 thoughts on “Cortado: Overview, Steps to Make It, and How to Order It at Starbucks”