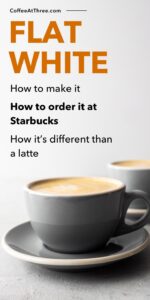 A popular Australian coffee drink, the flat white is a delicious balance of espresso and milk. See steps to make it, how to order it at Starbucks, and how a flat white is different than a latte.

What is a Flat White?

Difference Between Flat White and Latte

Espresso
Flat whites have 2 shots and lattes have 1-2 shots of espresso.

Milk
Flat whites and lattes both have the same type of textured milk. The milk is velvety and smooth (not fluffy or pillowy) and has microfoam (tiny bubbles).

Difference Between Flat White and Cappuccino

Espresso
Flat whites have 2 shots and cappuccinos have 1-2 shots of espresso.

Milk
Flat whites are made with smooth, velvety steamed milk but cappuccinos are topped off with steamed milk and fluffy, airy foam.

Drink size
Flat whites and cappuccinos are the same size at 6 ounces.

Starbucks makes their flat white with 2 shots of ristretto espresso and steamed whole milk, decorating the drink with a dot of steamed milk on top. Ristretto is a concentrated espresso in that it uses the same amount of coffee but extracted with less water.

A flat white is a 5-6 oz. drink but at Starbucks, you can order it in any size and they will add extra shots for a bigger sized cup.

To get the closest ratio of espresso to milk in an order of flat white, get the smallest size, a short, which is 8 oz. although it’s still bigger than a traditional flat white (5-6 oz.).

Breville’s compact but mighty machine that I personally use and recommend. Grinds coffee and steams milk too!
SHOP NOW

How much caffeine is in a flat white?

How strong is a flat white?

Lattes, cappuccinos, and flat whites all have the same amount of espresso but because a flat white has less milk than a latte and less foam than a cappuccino, it will taste stronger.

Do flat whites have latte art?

How hot is a flat white?

How can I make a flat white using my Nespresso?

Make a cup of espresso using a capsule then froth 4 ounces of milk. Pour steamed milk into the espresso. 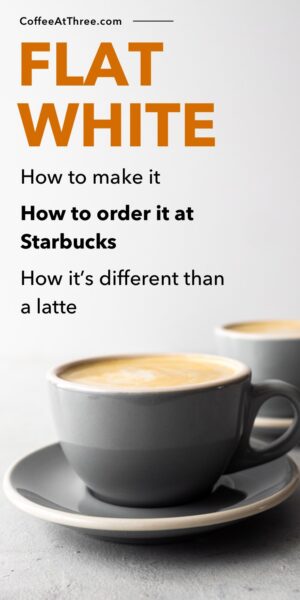 PIN THIS
Want to save this flat white guide for later? Pin it now to your Pinterest board!
SAVE TO PINTEREST 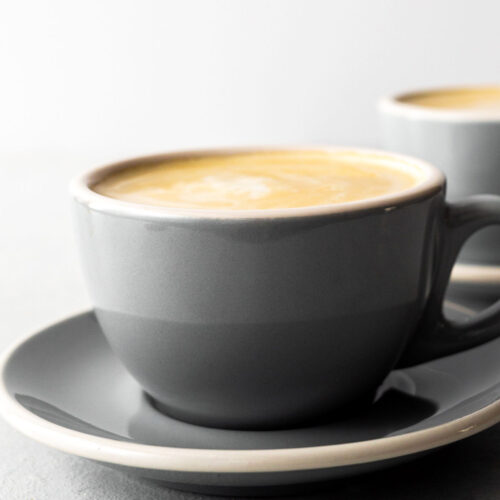 How to Make a Flat White

Flat whites are usually made with whole milk.

1 thought on “Flat White: Overview, Steps to Make It, and How It’s Not a Latte”