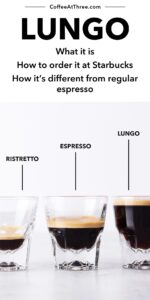 A lungo is an espresso drink made with more water. Take a look at this simple guide on lungo including how to order it at Starbucks and how to make it at home.

What is a Lungo?

Differences Between Ristretto, Espresso, and Lungo

Ristretto, espresso, and lungo shots are made the same way with the same amount of ground coffee. The main difference is the amount of water that’s used to make each drink.

Shot time
A regular espresso shot can take anywhere between 20-30 seconds to brew and a few second shorter for a ristretto. A lungo shot takes a few seconds longer.

Drink size
Ristretto is the smallest sized drink, at about ½ an ounce. Espresso shots are about an ounce and a lungo shot is the biggest, at 1 ½ ounces to 2 ounces.

Taste
Ristrettos are on the sweeter, lighter side while lungos are darker, with more bitter notes. Espresso is right in the middle with light and dark notes. Some people prefer lungos since they like the additional tasting notes you get with a longer shot.

You can order any espresso drink as a lungo at Starbucks. The espresso machines have a button for long shots so that more water goes through, filling the cup with more coffee. You don’t get charged more for ordering a lungo shot instead of an espresso shot.

You can order a lungo shot on its own, or you can replace any of the espresso shots in a drink like Iced Caramel Macchiato with lungo shots.

What You’ll Need to Make a Lungo

Perfectly sized for home use, this espresso machine makes espresso (ristrettos and lungos) for lattes and cappuccinos.
SHOP NOW

How to Make Lungo at Home

BARISTA’S TIP: There isn’t a set amount a drink needs to be to be a lungo so the easiest way to pull a lungo shot is to let your espresso shot go a few seconds longer than you normally would. The lungo just needs to be bigger than an espresso shot.

Can you get a lungo shot from a Nespresso?

Yes. Nespresso has a line of capsules that are specifically designed to be pulled as lungo shots.

Is a lungo the same as an Americano?

Nope. An Americano is espresso, with hot water added after the shot has been pulled. A lungo is a shot of espresso in which water is allowed to run through for longer. A lungo is a smaller drink than an Americano.

Do you add more coffee to make lungo?

The same amount of coffee is used to make ristretto, espresso, and lungo. The only difference is in how much water runs through the espresso machine to make the drink.

Want to save this lungo guide for later? Pin this to your Pinterest board now! 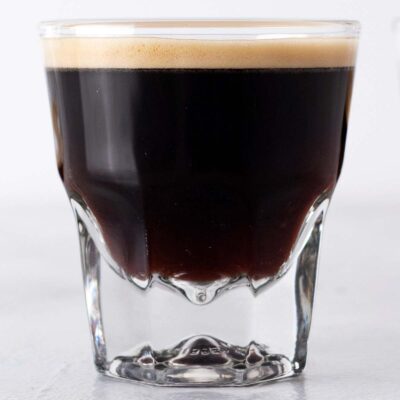 How to Make a Lungo

Sodium: 4mg | Calcium: 3mg
Did you make this recipe?Mention @coffeeatthree and use hashtag #coffeeatthree!