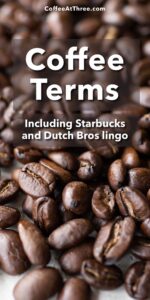 Aeropress
A manual device for making coffee using pressure. Coffee is steeped for 10–50 seconds then forced through a filter by pressing the plunger through a tube.

Affogato
A dessert, affogato is translated as “drowned” in Italian, it’s a scoop of ice cream or gelato “drowned” under a shot of hot espresso.

Americano
A drink made with espresso shots and water. Can be made hot using hot water and can be made iced with cold water and ice.

Arabica
The earliest cultivated species of coffee tree (Coffea Arabica), it accounts for 60-70% of the world’s coffee and is generally considered superior in quality to others. Starbucks and Dutch Bros only use arabica beans in all their blends.

Barista
The person who prepares coffee at a coffee bar or cafe.

Blade Grinder
A coffee grinder that uses a propeller-like blade. A drawback is that it creates inconsistently sized grinds but it’s less expensive and smaller than burr grinders.

Bloom
Part of the coffee brewing process when the coffee is dampened with water. Gasses are released from the coffee as water hits the grinds, causing them to grow and rise (“bloom”). This begins the brewing and extraction process of making coffee.

Brewing Temperature
One of the most important details of making coffee is water temperature because it affects the way coffee will smell and taste. It’s best to brew coffee using water that’s 200℉, which is just below boiling. Using an electric kettle with temperature setting is the easiest way to control water temperature at home.

Brewing Time
This refers to how long the water is in contact with ground coffee.

Burr Grinder
A coffee grinder with two adjustable shredding discs or burrs, often preferred over the blade grinder since it grinds coffee beans in consistent and uniform sizes.

Cafe au Lait
French for “coffee with milk,” cafe au lait is a drink made with brewed coffee (not espresso) and steamed milk. It’s usually half coffee and half milk. Starbucks calls this same drink a Caffe Misto.

Caffeine
A natural alkaloid in coffee, it’s a stimulant (wakes you up). The amount of caffeine in each coffee depends mostly on the extraction method, water temperature, and amount of water. Brewed coffee that’s made in a coffee machine will be more caffeinated than a quick espresso shot since the coffee is in hot water for longer.

Cappuccino
A traditional Italian espresso drink prepared with foamed, steamed milk. The proportion is one part espresso, one part steamed milk, and one part foam. It’s foamier than a latte.

Chemex
A coffee brewer that is shaped like an hourglass, it was designed by German inventor Peter Schlumbohm. It uses the pour-over method with denser paper filters than drip coffee filters. Some believe that it creates a sweeter, more well-balanced cup of coffee.

Cherry
The fruit of the coffee tree which looks like a small cherry. Inside the cherry skin is the coffee bean. Each cherry contains two coffee beans or one “peaberry.”

Clever Coffee Dripper
A filter cone with a stopper that lets coffee steep before dripping, extracting more flavor. It’s like a combination of the best features of a French press and filter drip.

Cold Brew Method
Medium grind coffee grounds are steeped in cold water for up to 24 hours, then strained to create a coffee concentrate. A 1:4 ground coffee to water ratio is a good place to start. Cold brewed coffee is less acidic and smoother than hot brewed coffee that has been cooled down then iced.

Cortado
Originated in Argentina, cortado means “cut” in Spanish, as in the espresso cuts the milk, visually and in taste. It’s a drink that’s made with equal parts espresso and steamed milk, usually 2 shots of espresso and 2 ounces of milk.

Crema
Thick, caramel-colored emulsified oils that rest on top of an espresso. It looks like a thin layer of foam on top of a shot of espresso.

Cupping
A method used by coffee professionals to taste coffee. Coarsely ground coffee is steeped with hot water in shallow bowls, then slurped from flat spoons. There is a standardized method to cupping.

Dark Roast
Coffee beans that are roasted until they exude oils. This roast takes a longer time, loses some of the caffeine content, and creates a more bitter tasting coffee. The darker the roast, the shinier the coffee bean from the oils.

Dirty Chai
A chai latte with a shot or 2 of espresso.

Doppio
Translated as “double” in Italian, it’s a double shot (2 shots) of espresso.

Drip Coffee
Brewed coffee made in coffee machine. Hot water hits the ground coffee in drips, then the brewed coffee drips down into the coffee pot.

Espresso
Concentrated coffee made when hot water is forced at pressure through fine coffee grounds. Espresso is the drink and the name of the method in how it’s made.

Espresso con Panna
Italian for “espresso with cream,” it’s a shot of espresso topped off with whipped cream.

Flat White
Originally from Australia, it’s an espresso drink with steamed milk. It’s different from a latte in that there is less milk in the drink.

French Press
A coffee maker invented by the Italian Ugo Paolini in 1929. It makes coffee by steeping grounds in hot water in a container that uses a manual plunger and metal filter (no paper filters) which pushes the grounds to the bottom.

French Roast
Dark roasted coffee beans that have a shiny coating from the oils. Has a charred or roasted taste.

Grind Size
The size that coffee beans are ground to make a cup of coffee. Different grind sizes are needed for various brewing methods. A finer, smaller grind is used for espresso, while medium grind is best drip or pour-over coffee, and a bigger, coarser grind is ideal for French press or cold brew.

Iced Coffee
Hot brewed coffee made in a coffee machine that’s cooled down and chilled with ice.

Iced Latte
An espresso drink with milk and ice.

Italian Roast
A very dark roasted coffee that’s roasted even longer than French roast. Italian roast coffee beans will look glossier or shinier because oils come out of the bean during the longer roasting process.

Kopi Luwak
Known as the world’s most expensive coffee, it’s a coffee from beans made with the help of a small ferret-like animal, the Asian palm civet, which is native to southeast Asia. The unique process begins when coffee cherries are eaten by this wild animal which it then excretes partially digested beans. The wild variety can sell for up to $600 per pound, while the farmed variety is closer to $45 per pound. Farmed kopi luwak is produced by caging the animals and force feeding them coffee cherries.

Latte
A drink made with espresso and steamed milk. Latte means “milk” in Italian and it’s a beverage that contains the most milk in ratio to the espresso.

Latte Art
Decoration formed in a latte by artistically pouring steamed milk into shots of espresso.

Latte Macchiato
An upside down latte, the milk is on the bottom of the drink and the espresso is poured on top. Macchiato means “marked” or “stained,” and in a latte macchiato, the espresso stains or marks the milk.

Lungo
An espresso with a longer extraction time, it contains more water than a regular espresso.

Macchiato
Translated as “stained” in Italian, an espresso doppio topped with a dab (about 1 ounce) of foamed steamed milk, about 2 to 3 ounces total. The milk looks stained from the espresso, hence the name. This drink is different from a latte macchiato, which is a bigger drink with milk on the bottom and espresso on top.

Mocha
A drink made with espresso (not brewed coffee), chocolate, and milk.

Moka Pot
A traditional Italian stovetop coffee maker, it was invented by Alfonso Bialetti in 1933. It uses pressure to make coffee so it’s similar to espresso.

Pour-Over Coffee
A drip coffee method invented in Germany and further developed in Japan where the hot water is poured by hand in a steady, slow stream over a filter cone with ground coffee. One cup of coffee takes as long as three minutes to brew.

Pull
A shot of espresso is “a pull.” Originally, espresso shots were actually pulled when the machines were lever operated, although modern machines have changed, the term stayed in place.

Red Eye
A cup of brewed coffee with espresso.

Ristretto
Italian for “restricted,” it’s an espresso shot pulled short (using less water) for a smaller, more concentrated drink. It’s considered sweeter than a regular pull of espresso. A ristretto is about 15-20 ml while an espresso is 25-35 ml in drink volume.

Roast
Raw, green coffee beans are roasted to create complex flavors that are extracted during brewing. The total roasting time affects the resulting coffees’ flavor profiles. The longer the roasting time, the darker the beans become and shinier from the oils released from the bean. A longer roast results in a dark roast (like French roast), and a short roast is a light roast. Light roast is called blonde roast at Starbucks and white coffee at Dutch Bros.

Roast Date
The date the coffee was roasted. Most small batch roasters put the roast date on bags of coffee. The sweet spot is using freshly roasted coffee 2 weeks after the roast date to give it enough time to de-gas.

Robusta
Robusta and arabica are the most common coffee species. Robusta is considered less refined in flavor and lower in quality than arabica. It’s used to create stronger-bodied tasting blends and it’s what’s in instant coffee. There’s more caffeine in robusta coffee beans than arabica.

Shot
A single serving (about 1 ounce) of espresso. Also known as a “pull.”

Single Origin
Coffee from a particular region, farm, or area within a farm. Examples include coffee beans from countries like Colombia, Kenya, Ethiopia, Guatemala, etc. Or from a certain region like Sumatra, Mexican Chiapas, Minas Gerais Brazil, Ethiopian Yirgacheffe, or even as specific as Kona coffee from Greenwell Farms (Hawai’i).

V60
V60 is Hario’s signature pour-over brewer and the name comes from the 60 degree angle of the cone’s profile.

Avalanche Style
A Dutch Bros customization that adds a scoop of vanilla ice cream to any blended drink.

Blended
A Dutch Bros’ term for blending a drink in a blender to make a frozen beverage. A blended coffee drink is called a Freeze at Dutch Bros.

Broista
A barista at Dutch Bros.

Cubano
A sugar packet added between shots of espresso.

Domino
Half white coffee and half regular espresso.

Extra Dub Shot
The term for an extra shot of espresso at Dutch Bros.

Freeze
A Dutch Bros’ version of an espresso-based frozen drink made in a blender.

Kick Me Mix
Dutch Bros’ own half & half, which is the default milk in their breve drinks.

Linebuster
A Dutch Bros employee who works the drive-thru line outside to take orders before a customer gets to the pick-up window.

Mafia Style
An espresso drink made with an extra “dub shot” and extra sweet.

Picture Perfect
Dutch Bros lingo for caramel and chocolate drizzle around the cup and on top of whipped cream. Usually, comes with whipped cream, but can be customized with a soft top.

Soft Top
Dutch Bros’ version of sweet cream cold foam, with a half & half base.

Affogato-Style
An espresso shot poured on top of a drink, usually a Frappuccino.

Upside Down
When ordering from Starbucks, an upside down caramel macchiato, for example, means the drink will be made in the opposite order so the caramel sauce is put in first instead of added last.

Want to save this coffee glossary to Pinterest for later? Pin it now to your Pinterest board!